As the Rottweiler bitch nears whelping time, a few days before the 63rd day from the first mating, we set up the whelping box. We have the bitch whelp and care for the puppies indoors because the south Florida heat can be difficult. It’s important to put the whelping box in a place that’s out of the way so the bitch feels undisturbed and secure. Using a correctly built whelping box is crucial because by design it protects the puppies from being accidentally smothered by the bitch. It will also contain the puppies until about 5 weeks when they become big and coordinated enough to climb out. A towel is placed inside the box to satisfy the bitch’s mother instinct, should she feel like going through the motions of moving puppies around.

Starting the 62nd day we monitor the bitch closely and don’t leave her alone. When she gives signs of restlessness, pacing and panting, we’ll guide her to the whelping box and make sure she stays inside. The bitch may require assistance at any point, so she is not left alone for the duration of the birth, and until all the puppies are stabilized and nursing. Help may be needed to pull out a puppy the bitch can’t push out on her own, cut the umbilical cord, dry a puppy and put it on a teat, resuscitate an unresponsive puppy, clean the afterbirth etc. The labor process can last 10 hours with a large litter, after which mom is exhausted and in real need of a rest, as are we. 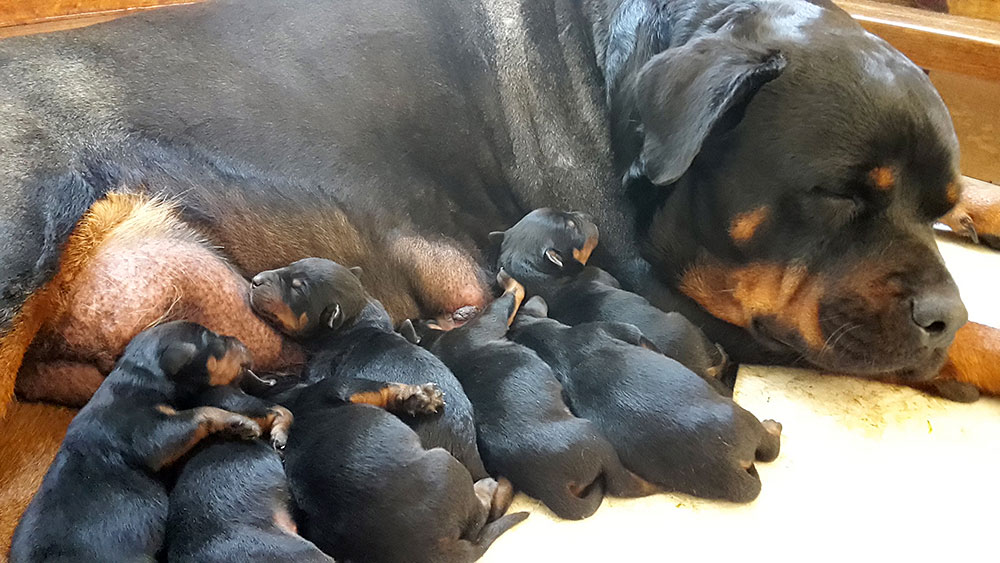 Around the 5th day once the puppies are stabilized the tails are thick enough we band them. Our stance on tail cropping is that Rottweilers with tails look nice, the original practical purpose of a cropped tail is normally not a factor with today’s Rottweilers, and natural tails have been the norm for Rottweilers in Europe for years now. But we acknowledge that in the US a cropped tail is the Rottweiler’s trademark, and natural tails are difficult for the majority of American Rottweiler fans to accept, so we go with the flow and crop.

Over the next 3 weeks we monitor the puppies closely. With a large litter a bitch may have a difficult time keeping all the pups fed, so bottle feeding will be required. We’ve used this formula with success:

* We have had puppies that did not assimilate the formula well or rejected it outright. In case of rejecting the formula we feed straight goat’s milk. You have to be very careful with straight goat’s milk as puppies tend to get constipated even more. Constipation is dangerous to a small puppy, in such a situation an enema becomes necessary. An enema consists of introducing 1cc of warm distilled water using a lubricated syringe into the puppy’s anus.

Keeping the whelping box clean is day long chore. Puppies get disoriented, stray away from mother and constantly require being placed at her side. Bitches that demonstrate a very strong attachment to their pups are reluctant to leave them even for a minute, need to be fed inside the whelping box and taken out on leash to relieve themselves.

Past the 3rd week the weaning process is started, and we introduce the puppies to eating from a dish. We use de-boned chopped microwaved chicken, wet in it’s own fat that was runoff from the cooking. At about 5 weeks of age the pups are given whole pieces of chicken microwaved for about 5 minutes then let cool down. They take to it very well.

By 5 weeks of age rottweiler puppies can be fully weaned and with proper care can be without their mother. But it’s not yet time for them to go to new homes. The puppies are now entering an important socialization period,. Spending time with each other and their mother over the next 2 weeks, they will learn the life long skills of interacting with other dogs.